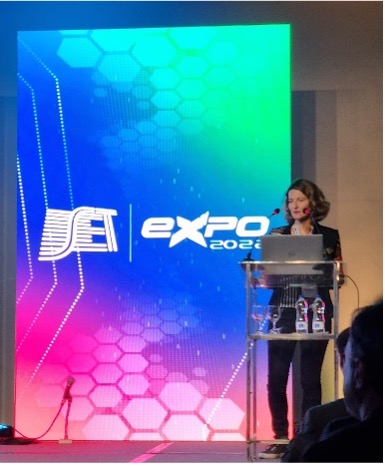 The convergence of wireless and video technology has spurred tremendous innovation and has the potential to revolutionize industries. With research heritage and expertise in both wireless and video, InterDigital is proud to be at the forefront of this innovation as we explore and enable new opportunities for the myriad ways they intersect.

This month, engineers from InterDigital’s Video Labs showcased their latest innovations in video coding and high dynamic range (HDR) solutions at São Paulo's SET Expo, the largest media and entertainment industry event in Latin America. Brazil is a world leader in next-generation digital broadcasting and the nation is home to SBTVD, a technical standard for broadcast television used throughout Latin America. In fact, SBTVD was among the world’s first broadcast standards to adopt the latest versatile video coding (VVC) format for its over-the-air (OTA) and over-the-top (OTT) applications.

InterDigital’s contributions to VVC have been noteworthy, and it is important to understand how VVC sets up the video industry for future growth.

Ultra-High Definition (UHD) video, or high-definition formats at resolutions of 4K and above, is widely anticipated across industry, and 5G is helping to prepare for its arrival. By 2025, 5G is expected to be the most widely deployed wireless network standard globally, and video is expected to account for roughly 80 percent of all mobile network traffic by that time. With each passing year, UHD video will account for an increasing share of that traffic, and that avalanche of dense video data will demand more efficient video codecs.

A video codec, shorthand for encoder/decoder, is a technology that facilitates the transfer of raw uncompressed video data from an original source into a compressed format that faithfully renders on a given display. The “art” of compression requires a bit of a tradeoff – the raw source file is of the highest quality but consumes an impractical amount of bandwidth for storage or transmission over airwaves or the internet. A compressed file retains the most important information for displaying a high-quality image, while dramatically reducing the file size. It’s a delicate balance between improving image quality without increasing file size or bandwidth and InterDigital’s research and innovation has contributed to compression algorithms and strategies that make it easier to achieve that balance. We are getting closer to the point where compressed video is nearly indistinguishable to the human eye from its raw source files.

Even as major streaming providers, with support from wireless network operators, have been eager to push toward UHD, broadcast and cable providers been somewhat reluctant to make the UHD transition. Unlike cellular wireless, where 3GPP is the dominant global standard, the video ecosystem features a variety of competing codec standards, including alternatives to the historically prevalent AVC, HEVC, and VP9, so there remains discussion around which codec will emerge as the go-to solution for most video applications and hardware.

Historically, dominant codecs have emerged despite the existence of multiple competing codecs. Over the past 25-30 years we've seen this pattern repeat: in 1994, MPEG-2 came into prominence; the first version of the AVC/H.264 codec was released in 2003 and later gained prevalence; HEVC/H.265 launched in 2013 and is still fairly dominant; and VVC/H.266 was launched in 2020 and is growing fast.

Major standards evolutions and codec transitions don’t happen overnight, and it will take several years before the new VVC coding standard is widely embedded throughout the video chain. Still, we anticipate that VVC has a promising future.

Not only is VVC already an excellent solution for 2D video, but as the ‘versatile’ in its name suggests, it's built to address a range of applications as video broadens to encompass 3D and other immersive content. As a hybrid video codec based on HEVC, VVC also leverages the commonalities with its predecessor to help it run more efficiently across a wider range of hardware. Efficient VVC is capable of a 40 to 50 percent reduction in bitrate compared to HEVC. As resolutions approach the 4K and 8K range, frame rates increase, and a greater percentage of overall video is delivered over 5G networks, efficiencies of this magnitude will be very attractive to the industry.

For these, and additional reasons, we believe VVC is poised to be the next predominant codec for the video industry. 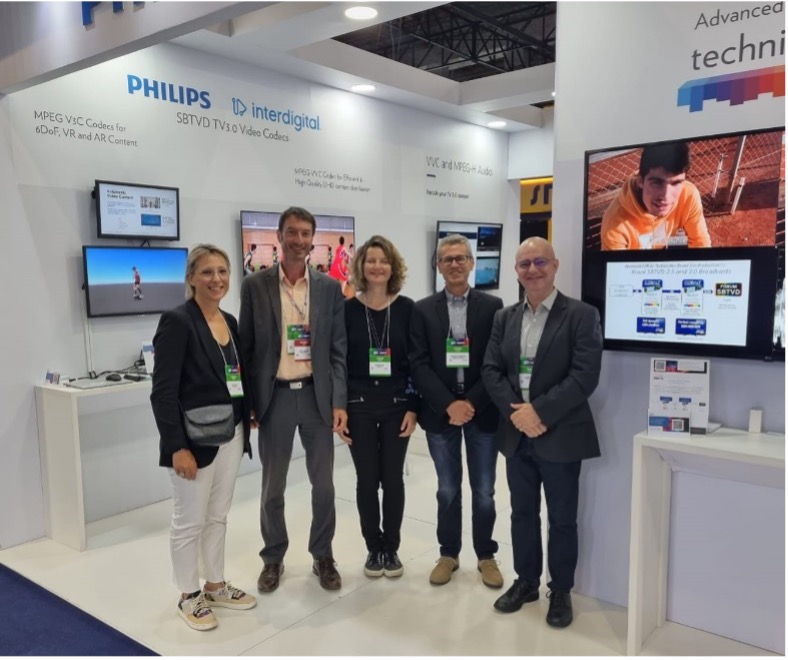 InterDigital is also leading the way in developing next generation technologies and award-winning solutions for high dynamic range (HDR) content. Through Advanced HDR by Technicolor, a research collaboration between InterDigital, Philips and Technicolor, we are ushering in the HDR era by accelerating the effort to make more HDR content available. As industry transitions from SDR to HDR content, a major challenge is ensuring flawless “backward compatibility,” so that a similar caliber of content can be enjoyed regardless of the quality of the display capability. Our contributions to Advanced HDR solutions automate the SDR-HDR conversion process for both live TV and post-production while ensuring the highest HDR quality rendering, thereby maintaining creative intent.

These solutions are significant for consumers and audiences because most people do not upgrade their TV sets as frequently as technology advances happen, thus leaving a delta between what audiences expect and what they actually experience. If our solutions didn’t support backward compatibility, a UHD stream with HDR wouldn’t render properly on older standard dynamic range (SDR) TVs in consumers premises.

We’re proud to share that our Advanced HDR by Technicolor solution performs as well for live events as it does for more sophisticated post-production of film and TV programming, owing in part to its innovative use of machine learning (ML). The ML algorithms allow content producers to deliver consistent image quality regardless of whether the content type is a live event, video-on-demand, or post-production.

In fact, our Advanced HDR solutions excel in live sports broadcast settings, where changes in lighting can cause havoc for production crews. Our contributions help Advanced HDR by Technicolor adjust dynamically to changes in light levels and perform light corrections on the fly.

In partnership with Philips, InterDigital also showcased new codecs and use cases associated with the MPEG Visual Volumetric Video-based Coding (V3C) standard, including Video-based Point Cloud Compression (V-PCC) and MPEG Immersive Video (MIV) codecs. Point clouds and immersive video with depth or transparency are complex sets of data representing points in space, and these codecs represent standardized formats for three-dimensional volumetric video compression. These standards are coming into increasing prominence as the industry moves toward more use of immersive video, extended reality (XR) and volumetric video. 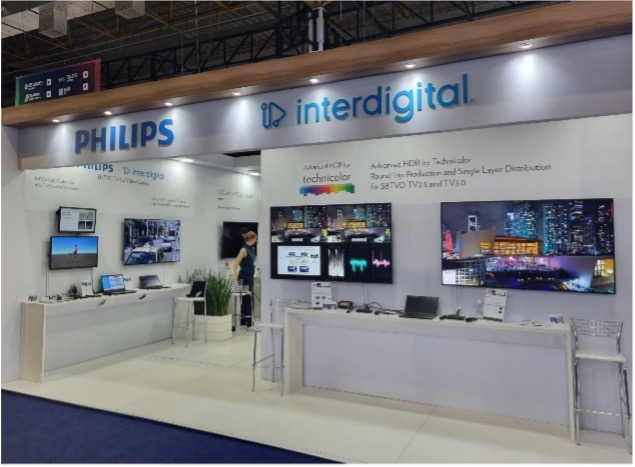 Both V-PCC and MIV have been adopted by the SBTVD Forum to fulfill XR requirements for TV3.0 in Brazil, making it one of the first countries in the world to encourage widespread use of these new immersive technologies. Standards developed by SBTVD are published via Brazil’s national standards organization Associação Brasileira de Normas Técnicas (ABNT) and are widely used in the Latin American region. The rising popularity of XR applications around the world has driven the media industry to explore the creation and delivery of immersive experiences through volumetric video, which consists of a dynamic sequence of frames where each frame is a 3D representation of a real-world object or scene capture at a different point in time.

Whether video is being consumed on a handheld device, or the latest 85-inch UHD TV, our contributions to both the VVC codec and Advanced HDR solutions make the experience better. We’re helping to ensure videos come in sharper, with richer colors, with higher dynamic range, more realism, and all while maintaining the artist’s original intent.

As InterDigital celebrates our 50th anniversary, our heritage of innovation in these critical areas continues to move the industry forward.

State of 5G Report: Enabling The Boundless Generation
WHITE PAPER / Aug 2022
5G is now a mainstream technology and a global success with nearly 1 billion subscribers already enjoying the high speeds the new generation offers. Previous generations created the applications and the hunger for high-speed connectivity on the go, and 5G is building on those to deliver high-quality, faster, and more...
Overcoming Directional Deafness in High Frequency Sidelink Communications
RESEARCH PAPER / Jun 2022 / 5G, Wireless communication, Network and Communications
"5G new radio (NR) sidelink (SL) is envisioned as a key enabler of high speed, low latency applications like automated driving. To meet the high data rate requirements for such applications, SL support at mmWave and sub-THz frequencies with large bandwidths will be essential. Several enhancements and optimizations will be...
Challenge: A System-Level Feasibility Study of Quantum Computation for Cost-Effective and Green NextG Cellular Wireless
RESEARCH PAPER / Jun 2022
"In order to meet the ever-increasing demands of mobile cellular users, radio access networks are designed today mainly with the goal of maximizing spectral efficiency. Such designs make efficient use of the frequency spectrum at hand, but also significantly increase the energy consumption and carbon footprint of the network. Consequently,...
Patent Holdout and the Quest for Balance in SEP Lice...
WEBINAR / Apr 2022
Understanding 3EMS: Energy Efficient Enhanced Media ...
WEBINAR / Dec 2021
The Challenge of Choosing Sustainability in the Vide...
WEBINAR / Apr 2021
Interns at InterDigital: Inside the Montreal Lab
BLOG / Sep 2022 / Posted By: InterDigital Comms
InterDigital at 50
BLOG / Aug 2022 / Posted By: InterDigital Comms
Advanced HDR by Technicolor and the Future of TV
BLOG / Aug 2022 / Posted By: InterDigital Comms