In a previous post we demonstrated how the wot.io operating environment can be used to translate between a number of different message protocols.

In particular, we'll show how to take devices that only speak MQTT, manage them with ARM mbed Device Server, which does not speak MQTT, all while maintaining the ability to route notification data to and from the usual full complement of data services on the wot.io data service exchange™. Just for grins, we'll even subscribe to the notification data over a WebSocket connection to show that the protocol conversions can be performed on the "inlet" or the "outlet" side of the data flows.

IoT/M2M Interoperability Middleware for the Enterprise

While the problem statement above may not sound all that interesting at first blush, consider that:

and it should start to become apparent pretty quickly how impressive a feat this actually is. (* the newest version of ARM mbed Device Server appears to also support HTTP bindings in addition to CoAP, but it's still a protocol impedance mismatch either way)

Because the real world is made up of multiple device types from multiple vendors. Making sense of that in an interoperable way is the problem facing enterprises and the Industrial IoT. It is also what separates real IoT/M2M solutions from mere toys.

the real world is made up of multiple device types from multiple vendors. Making sense of that in an interoperable way is the problem facing enterprises and the Industrial IoT. It is also what separates real IoT/M2M solutions from mere toys.

In fact, it would be extremely uncommon for enterprises not to have devices tied to multiple device management platforms. Managing them all separately in their individual silos and performing separate integrations from each of those device management platforms to data services representing analytics or business logic would be an absolute nightmare.

Recently, one of our partners were showing off how they had outfitted their office with a bunch of IoT devices. And of course (as always happens any time you get more than one engineer together), it wasn't long before we had their devices connected up to the wot.io operating environment so they could analyze with their IoT data to make it actionable.

The actual devices they were using were a collection of Wzzard Wireless Sensor nodes connected to Spectre Industrial Routers acting as gateway devices. These devices from wot.io partners B+B SmartWorx not only comprise a rock-solid, industrial-grade IoT platform, but they also speak MQTT—a common IoT/M2M device level communication protocol. As such, they were perfect candidates for our protocol interoperability demonstration.

The following diagram represents a high-level overview of our interoperability demonstration: 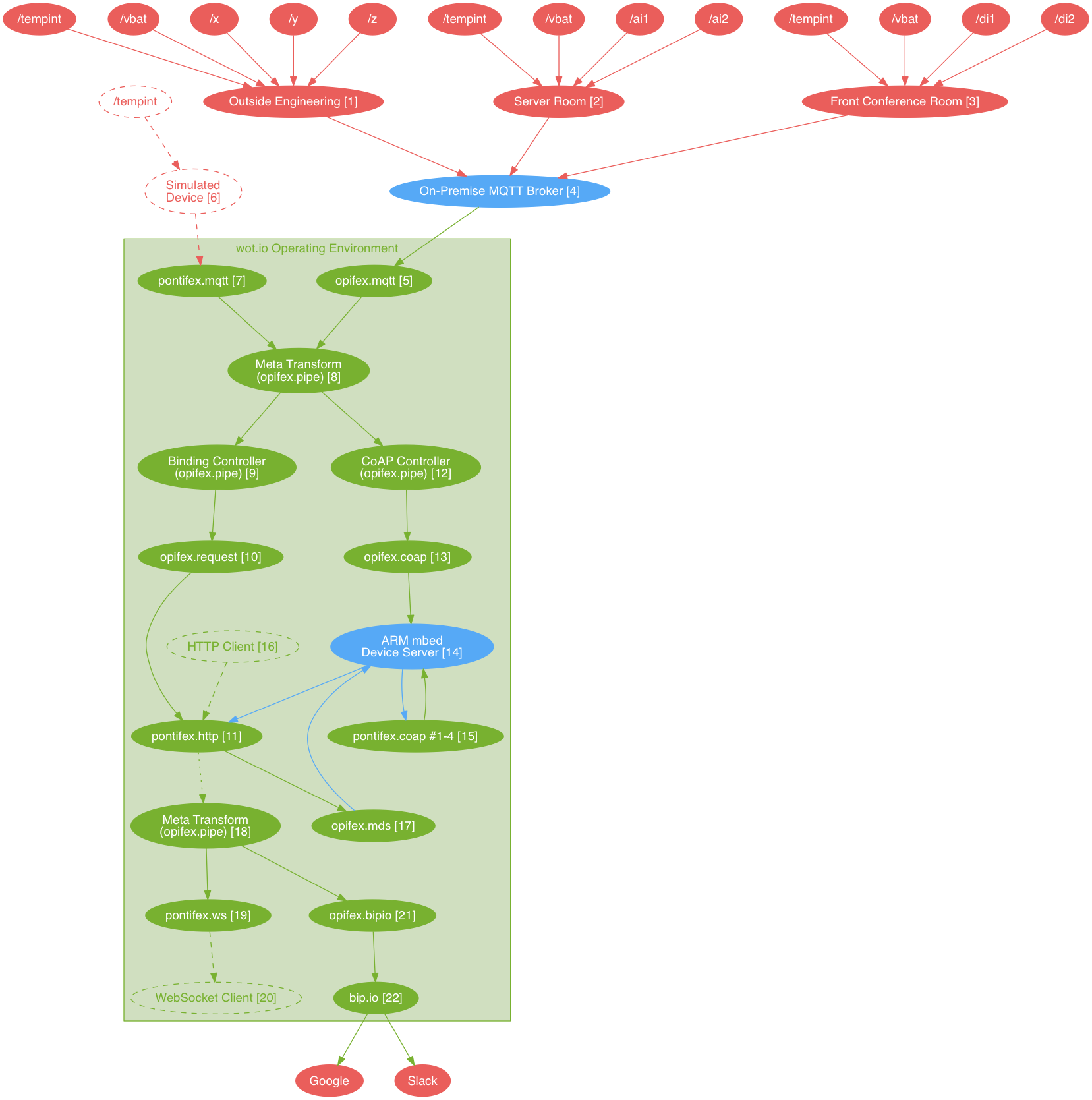 For demonstration purposes, we have only modeled a few of the many devices and sensors that are installed on our partners' premises. All three of these physical devices communicate with a local MQTT broker [4] to which our MQTT adapter [5] is subscribed. An example message looks something like

In addition, we have simulated a fourth device, [6], just to demonstrate how the wot.io operating environment can also act as an MQTT broker [7] in order to support scenarios where a separate broker does not already exist.

Irrespective of the originating device, sensor data from these devices is routed through a series of adapters that ultimately:

A result of this architecture is that one can target any data resource as the source of any data service.

For our present demonstration, this means, for example, that we can represent the physical devices [1-4] as "virtual devices" in a device management platform of our choosing—ARM mbed Device Server in this case—whether or not it even supports devices of that make and manufacturer.

In fact, at a high level we will perform the following mappings between different representations of the device topology:

Now that's some serious interoperability. Let's zoom in even a little closer, still.

Recall that earlier we described significant impedance mismatch between the protocols involved in this interoperability exercise. Let's examine the other adapters involved and see how they can be cleverly combined to resolve our impedance issues and allow us to manage virtual devices in ARM mbed Device Server.

Picking up where we left off earlier in reference to our architecture diagram,

In order to maintain the registration, [13] will also send CoAP registration update messages as required by ARM mbed Device Server once the initial registration has occurred.

With just these few adapters, we have successfully used CoAP to registered virtual devices to represent our real MQTT-based devices in ARM mbed Device Server. You can see they now appear in the endpoint directory of mbed Device Server's administration interface: 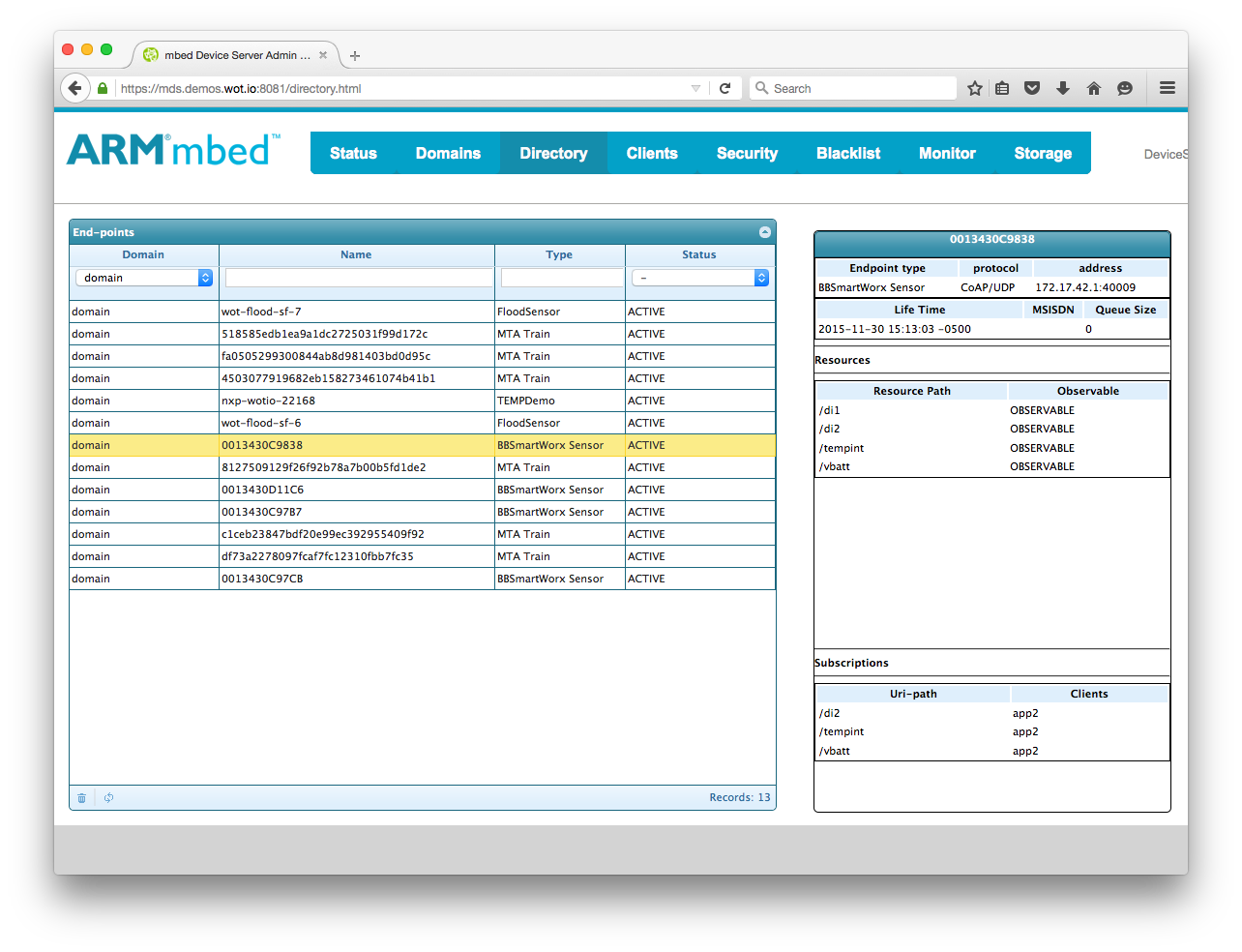 Now that our devices have been virtualized in our device management platform of choice, we can treat it as any other fully integrated wot.io data service. That is, we could choose to subscribe to notifications for one or more of the device resources and route them to one or more data services.

NB: observe=0 means observable is true! Also, notice that the device identifier is missing and only the resource name is specified. This is because back in [9], we mapped the stateful, UDP-based endpoint for a specific physical device to a specific virtual CoAP adapter [15]--the one that is receiving this GET request.

The response sent back to ARM mbed Device Server [14] from the CoAP adapter [15] would look something like this:

Now that our notification data is once again represented as a wot.io data resource, we can route it to any of the services in the wot.io data service exchange™.

For example, if we create a "bip" in the web API workflow automation tool, bip.io we can pick off specific attributes and send them to any of a number of other 3rd party service integrations. For example, see the steps below to append rows to a Google Sheet spreadsheet where still more analysis and data interaction can occur. For example, column D in our spreadsheet contains a custom base64 decoding function written in JavaScript. 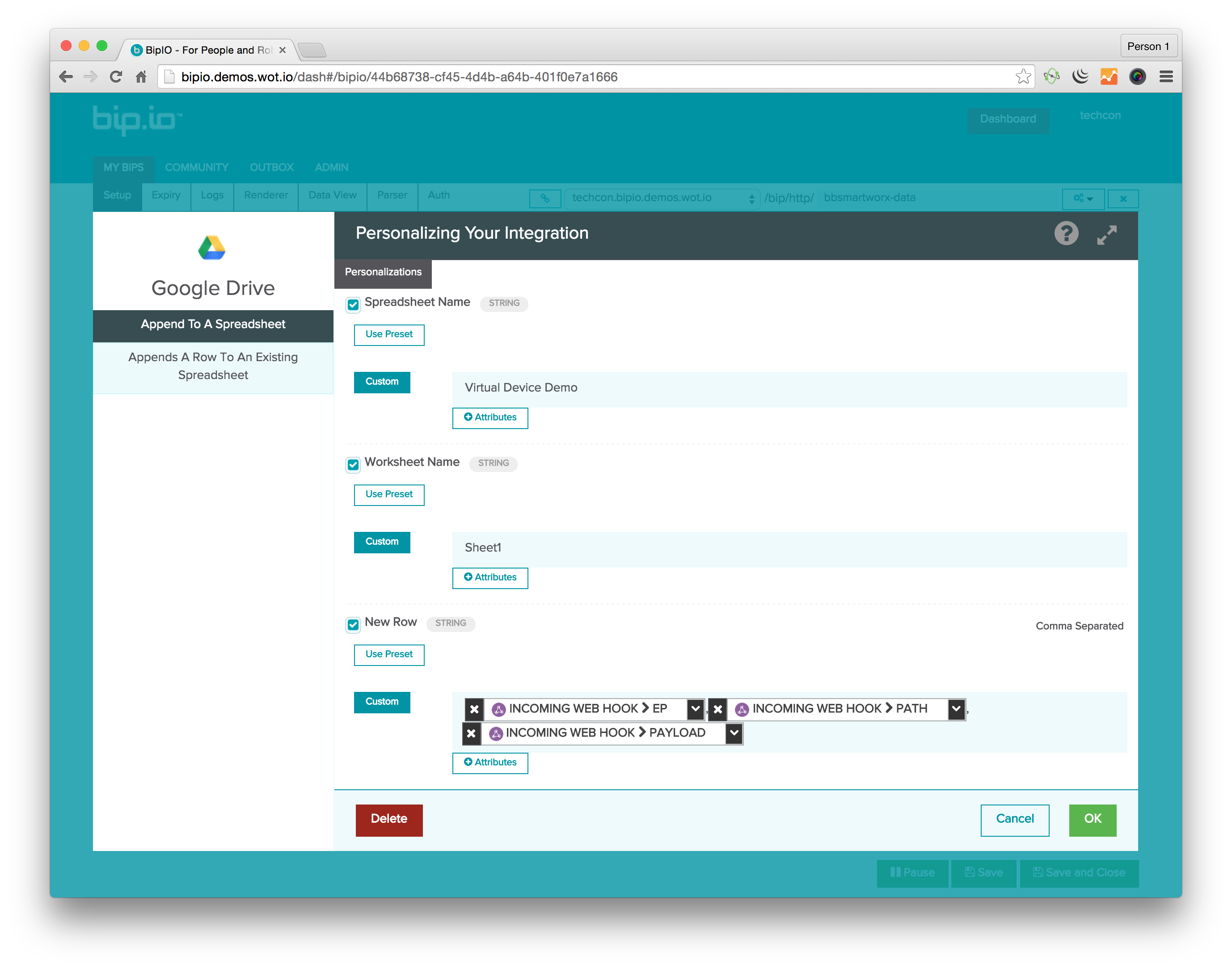 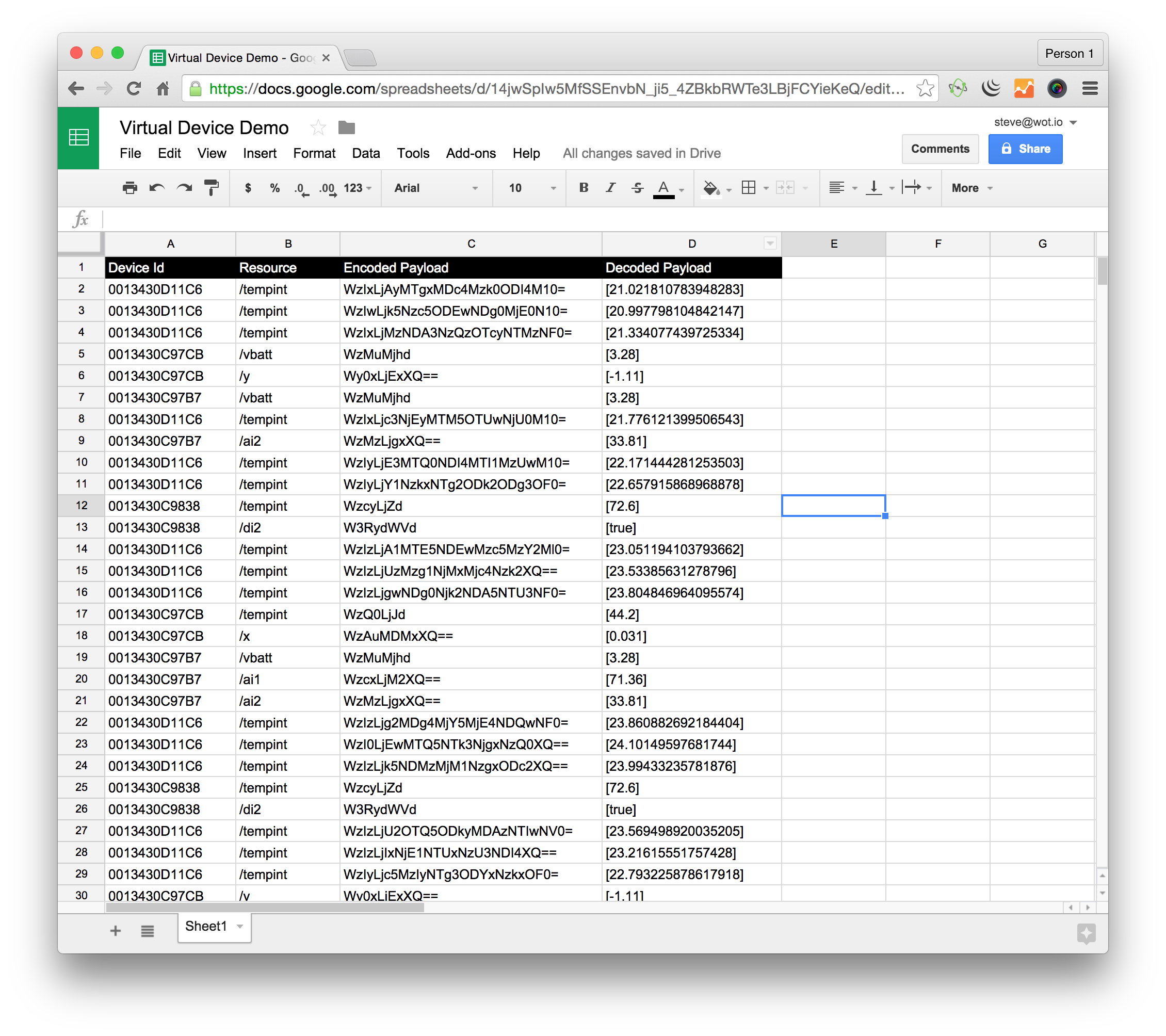 Today, we have demonstrated an extremely powerful capability afforded by the wot.io operating environment whereby we can combine a several protocol and data service adapters to extend device management services from IoT platforms like ARM mbed Device Server to devices that speak unsupported protocols like MQTT.

In a future post, we will build on this concept and show how we can turn any wot.io data resource into a "virtual device" managed by a device management platform—even ones that don't originate from devices at all!

It is through powerful capabilities like these that wot.io can truly claim to offer real-world IoT/M2M interoperability middleware for the enterprise.!

State of 5G Report: Enabling The Boundless Generation
WHITE PAPER / Aug 2022
5G is now a mainstream technology and a global success with nearly 1 billion subscribers already enjoying the high speeds the new generation offers. Previous generations created the applications and the hunger for high-speed connectivity on the go, and 5G is building on those to deliver high-quality, faster, and more...
Overcoming Directional Deafness in High Frequency Sidelink Communications
RESEARCH PAPER / Jun 2022 / 5G, Wireless communication, Network and Communications
"5G new radio (NR) sidelink (SL) is envisioned as a key enabler of high speed, low latency applications like automated driving. To meet the high data rate requirements for such applications, SL support at mmWave and sub-THz frequencies with large bandwidths will be essential. Several enhancements and optimizations will be...
Challenge: A System-Level Feasibility Study of Quantum Computation for Cost-Effective and Green NextG Cellular Wireless
RESEARCH PAPER / Jun 2022
"In order to meet the ever-increasing demands of mobile cellular users, radio access networks are designed today mainly with the goal of maximizing spectral efficiency. Such designs make efficient use of the frequency spectrum at hand, but also significantly increase the energy consumption and carbon footprint of the network. Consequently,...
Patent Holdout and the Quest for Balance in SEP Lice...
WEBINAR / Apr 2022
Understanding 3EMS: Energy Efficient Enhanced Media ...
WEBINAR / Dec 2021
The Challenge of Choosing Sustainability in the Vide...
WEBINAR / Apr 2021
Interns at InterDigital: Inside the Montreal Lab
BLOG / Sep 2022 / Posted By: InterDigital Comms
Demonstrating Advances in Video Coding and High Dyna...
BLOG / Aug 2022 / Posted By: InterDigital Comms
InterDigital at 50
BLOG / Aug 2022 / Posted By: InterDigital Comms