I’m writing this from the plane while traveling home from the ARM TechCon 2015 conference. ARM has a vibrant community of IoT innovators, and ARM TechCon was a great event where wot.io were finalists for the Best IoT Product award and hoped for a repeat win to back up our 2014 Best of Show award. Congratulations to our partners at Atmel, though, for beating us out in the end. Of course, we like to think we helped nudge them ahead by featuring Atmel hardware as a part of our demonstration. We’ll get them next year, though ;-)

On the final day of the Expo, I happened to be chatting with some folks from Freescale—another wot.io partner and fellow ARM mbed Zone exhibitor, not to mention Best in Show and Reader’s Choice award winner! The folks from Freescale had seen how we were already routing sensor data from their devices to a complex array of data services, and wanted to know how difficult it would be for Freescale developers to harness a tiny sliver of that power—say to connect their devices to ARM mbed Device Server and another data service like bip.io—and most importantly, to get it working quickly and easily.

Unfortunately, the Expo hall was closing and we were packing up our respective booths; but I told him that what he asked should be easy since the work was really already done. I promised to pull together some sample code and instructions on the plane the next morning.

So that's just what I'll try to do in this post.

The following is a block diagram showing the array of data services that we demonstrated at the event. 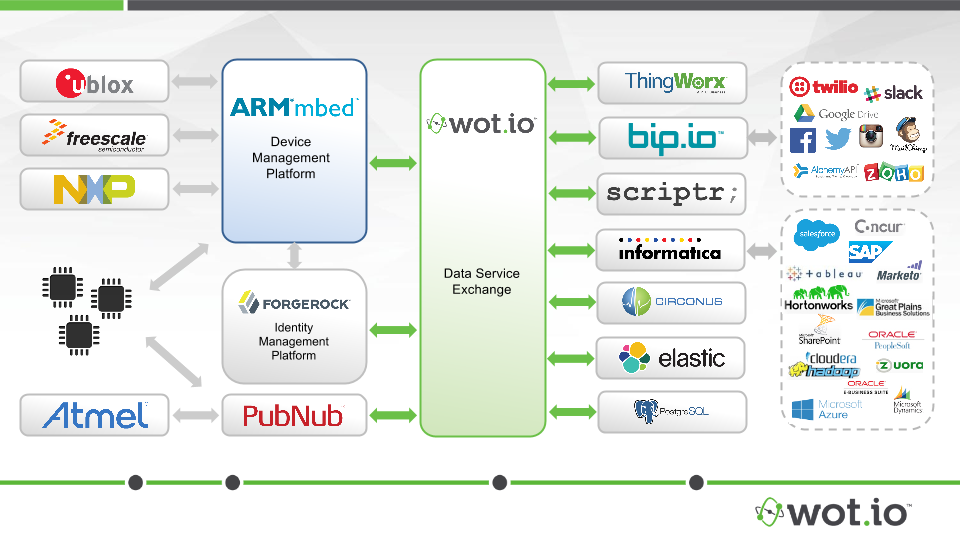 The full demo really deserves a post of its own. For now, I just want to outline the simplest possible way to hook up a Freescale device to ARM mbed Device Server and bip.io.

In a previous post, we've already shown how to get a Freescale FRDM-k64f board running ARM mbed OS connected to an instance of ARM mbed Device Server. So just to keep things fresh, this time we'll start from an existing ARM example project.

As expected, it was quite straightforward to update the existing example code to work with wot.io. (In fact, the code changes were quicker than the updates to the README!) You can find the source code on Github.

In source/main.cpp we only needed to change the location of our mbed Device Server

and then, since our ARM TechCon demonstration server was not using TLS, we need to remove the certificate-related attributes and instead set the M2MSecurity::SecurityMode to M2MSecurity::NoSecurity when we create the register server object:

We should now be able to build our mbed OS application using yotta. (see the README for instructions). In my case, I think I'd better wait until I get off the plane before I start programming blinking devices with dangling wires to test this out, though. 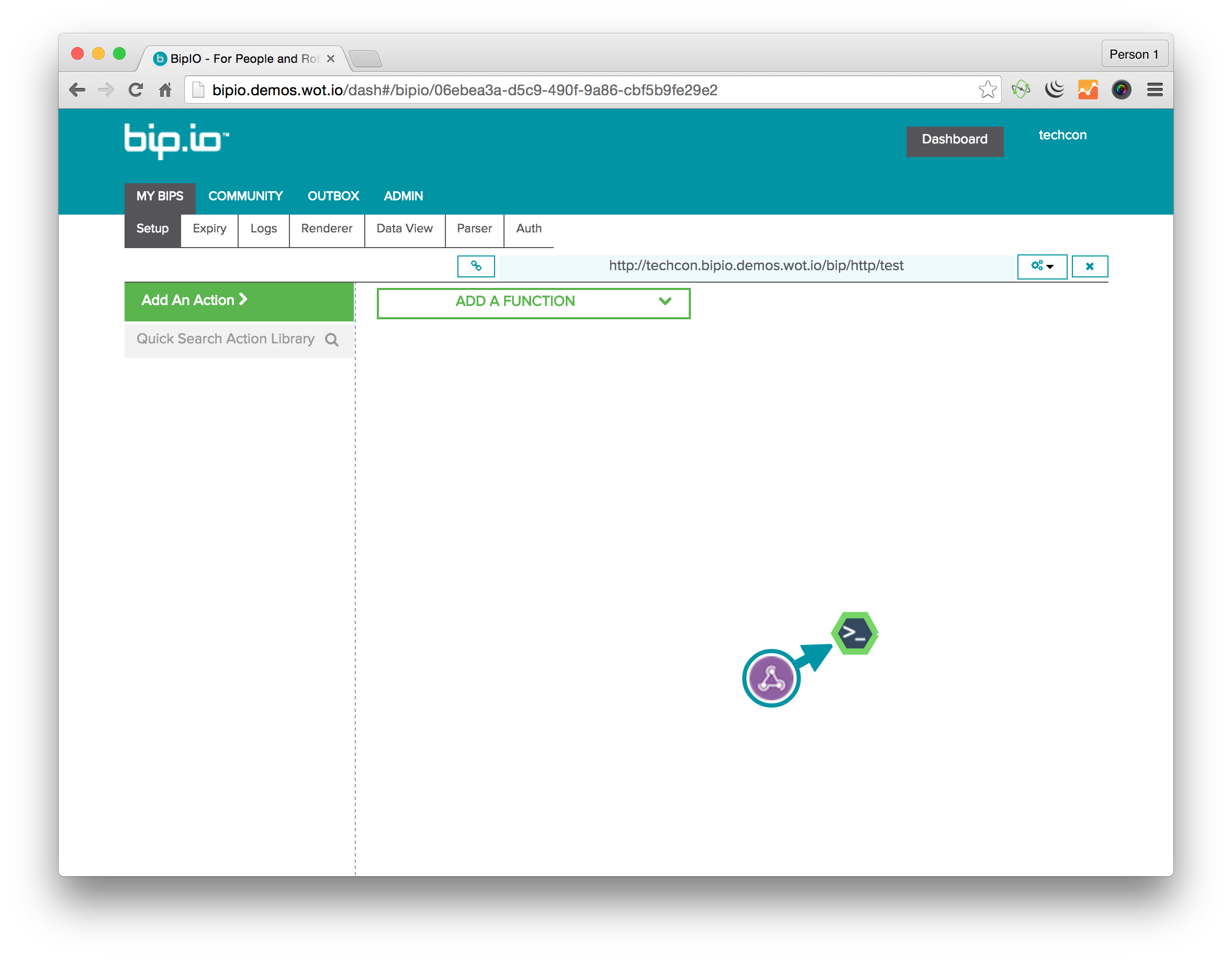 Since we want to have mbed Device Server send device notifications to bip.io, we need to register a notifcation callback via the REST API. The general form of the API call is

to have notifications sent to "http://callback.example.com/path". But in our case, we will also need to supply some security credentials for the API call and some custom headers for the callback in order to make everything work for bip.io. In addition, once we have registered our callback, we need to subscribe to notifications for a particular resource. Recall that our dynamic button-press resource was identified as /Test/0/D in main.cpp. The final API calls have been captured in the script bipio_subscribe for convenience:

Now, with the FRDM-k64f board connected, we can run the bipio_subscribe script to have notifications sent to our new bip. We can also view the "Logs" tab for our test bip to verify that notifications are being received, or the "View" tab of the "View Raw Data" to see the messages themselves. 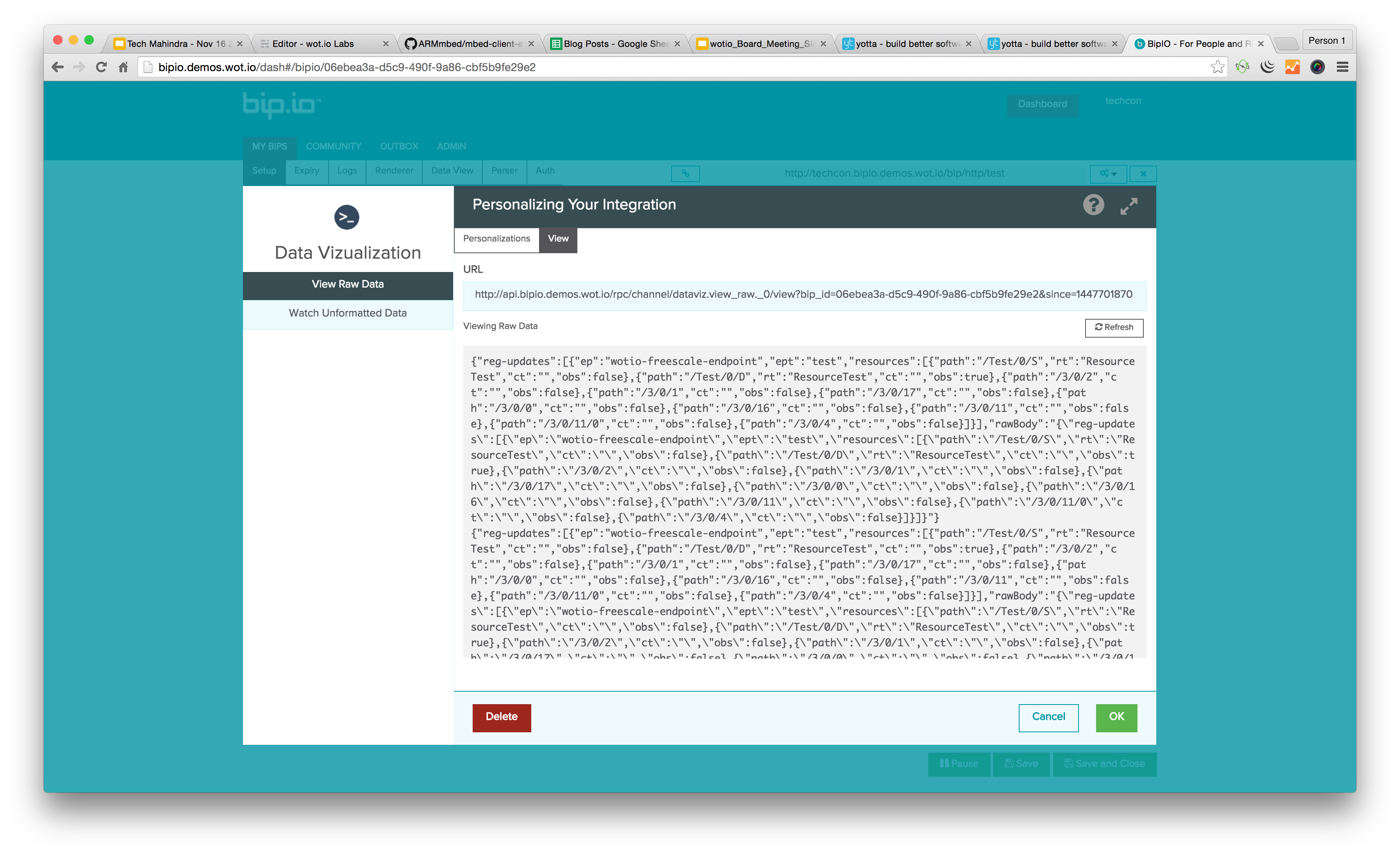 That's it! That's all there is to it! Of course, we can modify our bip to do something interesting like manipulate the messages, send them as part of SMS or email messages, save them to Google documents or send them to any of the other 60+ integrations that bip.io offers.

Next time, we'll tweak the demo a bit further to hook up to the newly announced ARM mbed Device Connector cloud service—a convenient tool to use during prototyping—and use our button-push events to interact with other services on the wot.io data service exchange.