The Internet of Things (IoT) is a hot industry, poised for substantial growth. In fact, International Data Corporation (IDC) projects the industry will grow from 655.8 billion in 2014 to 1.7 trillion in 2020. That’s over 1 trillion dollars in growth in just six years! Because IoT is such a hot topic in the tech industry, Tech in Motion in NYC hosted a meetup event on Tuesday, October 13th 2015, sponsored by Grind + Verizon to discuss all things IoT. wot.io Founder and CEO Tom Gilley was invited to speak along with key speakers from other IoT companies in New York City. 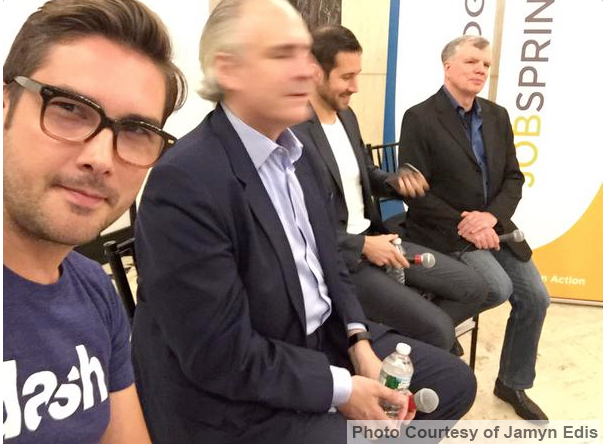 The speakers talked about the IoT problems their respective businesses are solving, as well as their perspective of the direction IoT is moving in. From sensors and wireless connectivity becoming common in household products, to triggering automatic ordering of household products when they get low, to the numerous types of wearable devices companies are working to create, it’s easy to see why IoT is getting so much attention. Dash Founder & CEO Jamyn Edis says “IoT is clearly a macro trend that is engaging professionals in the tech space. The question is, when does a broad trend become a real, day-to-day, revenue-driving opportunity for companies and people working at them? We are not yet there.”

When asked about the most pressing issue in IoT right now, Ted Ullrich, Founder of Tomorrow Lab, said “On the commercial product side, there in an open pasture for creating new devices, brands, and services. Wireless protocols like WiFi, Bluetooth, and Cellular are sufficient for these products for now, but planning an infrastructure for the future of 30+ billion things on the internet is a different story.” Quite right he is.

Since there are no dominant IoT standards, many companies have a mix of internal, closed IoT platforms with plans to adopt new platforms like Thingworx. Thingworx is a well known brand, and is good at what it does. The organizational result is a mix of IoT platforms that have interoperability issues. McKinsey Institute recently stated that “Interoperability is critical to maximizing the value of the Internet of Things. On average, 40 percent of the total value that can be unlocked requires different IoT systems to work together.” This is the big picture reason why wot.io exists: to create an interoperability environment where device management platforms can seamlessly and securely connect with enterprise applications for data analysis, reporting, automation and much more.

It’s no surprise to us this event was a success, with a packed room and over 500 people RSVP’d to attend. The audience was engaged, enthusiastic and asked plenty of questions, both during the event and after the talks were over. Where do you see the Iot industry heading? Leave your comments below.

*McKinsey Institute quote from the June 2015, “Unlocking the full potential of the Internet of Things”

MWC18: Creating the Living Network. Together.
PRESENTATION / Feb 2018 / MWC18, 5G, IoT, Sensors
Everything we do, from wireless platforms to IoT and beyond, is designed around partnership. Find out how InterDigital is Creating the Living Network. Together. in this MWC18 presentation.
Scattering Features for Multimodal Gait Recognition
RESEARCH PAPER / Nov 2017 / Machine/Deep Learning/AI, IoT Computer Vision
We consider the problem of identifying people on the basis of their walk (gait) pattern. Classical approaches to tackle this problem are based on, e.g., video recordings or piezoelectric sensors embedded in the floor. In this work, we rely on acoustic and vibration measurements, obtained from a microphone and a...
ABI Research: Smart Cities and Cost Savings
WHITE PAPER / Nov 2017 / IoT, Smart Cities, Transport, oneTRANSPORT, Data Marketplace
Smart city technologies could save enterprises, governments and citizens globally over US $5 trillion annually by 2022. This is the conclusion reached by ABI Research in this new white paper, which analyzes the scope for cost savings and efficiency as a driver for smart city deployments, smart technologies and the...
IoT Access Technologies: Weighing Quantity Against Q...
WEBINAR / Nov 2018 / IoT, MWL
MWC18: Chordant - SCEF Interface
VIDEO / Mar 2018 / MWC18, IoT
MWC18: Chordant - Edge Processing
VIDEO / Feb 2018 / MWC18, IoT
World IP Day: the power of youth
BLOG / Apr 2022 / Posted By: Simona Popa | Senior Director, Government Relations and Regulatory Affairs
Earth Day 2022: Reflections on InterDigital’s Enviro...
BLOG / Apr 2022 / Posted By: InterDigital Comms
Sensing an Evolution: How InterDigital’s Work in Mul...
BLOG / Apr 2022 / Posted By: Chathura Sarathchandra and Ulises Olvera-Hernandez